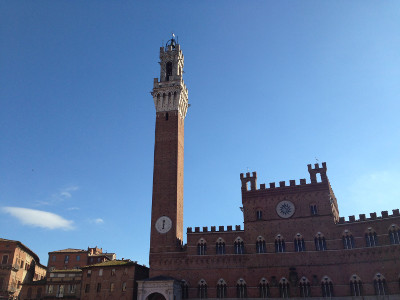 Situated in the heart of Tuscany and surrounded by hills, Siena is considered one of the most beautiful medieval town of Italy.
In the middle of the town there is the famous Piazza del Campo, with its particular shell-shape, where the well-known horse race Palio di Siena takes place twice per year (in July and August) which dates back to the XVII century.

According to the legend, Siena was founded by Senio, a son of Remus, and in the city you can still find lots of statues of the mythical Romolus and Remus suckled by the she-wolf. In the Museo Civico you can admire some of the finest paintings of the Sienese school. The Concistoty Hall offers one the most beautiful works of Domenico Beccafumi, who frescoed the ceilings depicting the “Circle of the public virtues”. In the Mappamondo Hall and in the Peace Hall (or Sala dei Nove) there are real masterpieces: the great Maestà and the equestrian portrait of Guidoriccio da Fogliano all’assedio di Montemassi by Simone Martini and the Allegories of the Good and Bad Government by Ambrogio Lorenzetti, considered one of the major painting cycles of the Middle Age.